skip to main | skip to sidebar

Are you an Effective Leader?

To be an effective leader AND flourish one must have the following 7 qualities.

Imagine being a palm tree in a desert, a harsh environment...
1) You must have deep roots (a strong foundation) to be stable. If you wish to build a high tower, you better first dig a deep hole, or like a building, you will topple over. These deep roots are also necessary to feed when surface water is low or nonexistent. A leader constantly learns (feeds).
2) You must also have roots that spread out for extra stability. Think of these roots as your networking with other strong people. Think of these roots as being intertwined so when strong winds blow, you can support each other. A great leader is connected with others who share similar values.
3) You must provide shelter for others beneath your canopy of branches. You are to provide shade from the scorching sun to younger plants so they too can survive. A great leader helps others grow so they too mature and become leaders.
4) Fire (adversity) is good and helps burn away pests clinging to your trunk. A great leader learns fro their mistakes, circumstances, adversities and is able to move on.
5) Strong winds are also good in that they naturally prune away for leaves that are no longer strong and useful. A great leader is teachable and allows "qualified" others to shape and speak into them.
6 & 7) read my book "Giving God the Helm, Overcoming Storms of Adversity" to learn more. Available at OvercomingForLife and Amazon.

If you understand and embrace these 7 qualities, you are well on your way towards be a great leader and flourishing like a palm tree. Despite an often harsh environment, you too will flourish!

Mark Kuhne
Posted by KuhneGallery at 10:40 AM No comments:

"Giving God the Helm is Reviewed by Richard R. Blake for Reader Views

Mark Kuhne likens life’s trials and tribulations to facing the turbulence of the open sea in a row boat. In his book “Giving God the Helm: Overcoming Storms of Adversity” Mark shares from his own life experiences to encourage the reader to make Jesus the Captain of their lives. He goes on to show the reader how; by turning over the helm of their life to Jesus, He will lead you into safer waters, in the midst of tumultuous life difficulties and adversities.

Throughout his story Mark refers to “The Parable of the Pontoon Boat.” He candidly tells how blinded by circumstances and enticed by visions of ownership and pleasure, against his better judgment, he became the owner of a pontoon boat. What started out as a “free gift” became a costly lesson, revealing Mark’s vulnerability, his weakness, and his stubborn heart.
Later, in a similar instance, with much more at stake, Mark discovers the hard way that he has not learned his lesson and once again finds himself accepting what he thought was a favor (or free gift) which turned out to be a nightmare, the worst storm of his life.

Mark Kuhne’s writing is founded on proven Biblical principles, examples, and faith building lessons leading to spiritual growth and living victorious Christian lives. He uses the Old Testament story of the spirit of Jezebel to help the reader understand the forces of spiritual battles and the armor to fight these battles. He has a unique way of clearly articulating how to use the energy from your adversities to transform your life by applying your faith to help you proactively avoid the worst of storms to overcome anxiety, fear and depression.
Throughout the book are bold highlighted tips, advice and inspiration, for example: “No matter how difficult the circumstances, the experience will prepare you for something greater if you determine to learn and accept the lessons from God, your Captain.”

The selected scripture passages that offer promise and possibility are another source of inspiration. Other important features are the comprehensive selection of Bible affirmations and suggestion resources.
Mark relates how, on occasion, he has found direction from the interpretations of dreams in the midst of a particular trial. This may raise a flag from some readers. However, I found Mark’s foundational theology to be solid.

After 25 years in banking, Mark Kuhne left his position as Community Bank President to pursue painting and writing full-time. He has included black and white replicas of many of his original paintings. These dramatically reinforce and impact a number of the Biblical examples included in the narrative.

“Giving God the Helm: Overcoming Storms of Adversity” is a strong reminder of the power and possibilities available to the person willing to turn their life over to God as their Captain
Posted by KuhneGallery at 2:02 PM No comments:

Susan's Blog: Ron DiCianni: Painting the Resurrection - CBN.com
Posted by KuhneGallery at 11:05 AM No comments: 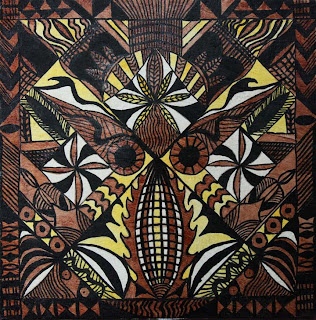 I am soaking up the oldest Samoan cultural traditional art form called Siapo (tapa) while here in American Samoa. Siapo has been passed down through generations and had international attention when a tapa was presented to Lady Bird Johnson in 1966. My instructor at the American Samoa Community College is Regina Meredith. She is also related to the women who brought this to international attention (see www.siapo.com for more details).

I prepared my siapo board using a starch arrowroot paste: glued 2 plys of u’a (paper mulberry or bark paper that comes from the skinny tree being wet, hammered over and over until it creates a cloth). This was even used for clothes before cloth as we know it was brought into the islands.

Our brush is the pod or key from a pandanus bloom trimmed with a scissors to a point of desired thickness. The pointed end holds the dye better than any other type of brush. The 4 dyes are
• Brown: made from the bark of the blood tree. It has a tannic acid that is also used to tan leather, for example.
• Black: made from the candlenut tree bark, burned and turned to soot. Since this is a time consuming process, we used India ink.
• Red: from the loa tree, also known as the lipstick tree, comes from the berry. This was not in season (not used).
• Yellow: the only dye from a plant root, the lega plant that has turmeric. The root is orange similar to a carrot and has a very pleasing smell. Once grated it is squeezed to extract the yellow dye.
• Both yellow and brown also had medicinal properties: helped cure upset stomach or constipation and the yellow was rubbed on sores.
• We rubbed our boards with a glass jar to burnish or smooth the surface to prepare it for the dyes.
I used traditional motifs or symbols to create my tapa:
• Net (Fa’a ‘au’upega) crossed lines, nets used to catch turtles and pigeons.
• Trochus shells (Fa’a ‘aliao): triangle shapes in numerous formations.
• Sand piper (Fa’a tuli) and also their footprints (Fa’a vae tuli).
• Starfish (Fa’a ‘aveau).
• Snmall lines or wavy lines (Tusili’i): midrib of coconut leaves used in household items like making brooms or needles.
• Male pandanus bloom ( Fa’a sigago): narrow petals with cluster of sharp points.
• Breadfruit leaf (Fa’a lau ulu).
• Banana pod (Fa’a tumoa).
• Rolled pandanus leaves (Fa’a masina).
• Centipede (Fa’a atualoa).

Images may be grouped or sized an any combination. My overall image also forms what should look like a mask. Interestingly, the various islands in the Pacific have different names for this art and use different materials to make dyes and some use stencils to form their motifs.
Posted by KuhneGallery at 1:26 PM No comments:

Learn more about these paintings and more at www.KuhneGallery.com.
Become a fan at www.Facebook.com/KuhneGallery
Posted by KuhneGallery at 11:38 AM No comments:

Here is an urgent Prayer Request for India from a Christian Apostle Samson Roberts, IFCI, India. A massive cyclone named “Laila” has hit. Extend your prayers for the safety of lives and livestock. Share this request with your networks and repost, tweet, etc! Samson Roberts thanks you much. he didn't ask but please consider how you can help with donations.

In Christ,
Mark
Posted by KuhneGallery at 4:34 PM No comments: 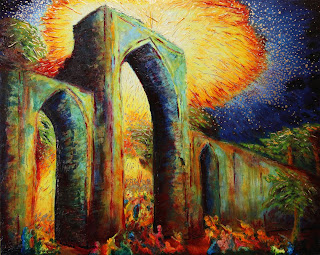 Matthew 28:19: “Go therefore and make disciples of all the nations, baptizing them in the name of the Father and of the Son and of the Holy Spirit, teaching them to observe all things that I have commanded you; and lo, I am with you always, even to the end of the age.”

Painting is a large stone wall with a great arch entrance; at the top is a cross with the Lord’s glory bursting forth! Numerous people are coming and receiving Christ. Women are dressed in their colorful robes and many are kneeling and praying with their hands lifted to the Lord.

This painting specifically honors CP Thomas and Samson Roberts Kolagani's evangelism in India: they have converted thousands of Muslims, Hindu, and Taliban to receive Christ as their Lord despite hazards and persecution.

It is also about Christ’s Family Church International (and Christian Family Church World Outreach) apostolic outreach from MN to Russia, Norway, Honduras, Philippines, Taiwan and other countries. CFC is responsible for 100's if not thousands of church plants! CFC is making disciples of nations!

Give Christ the glory!
Posted by KuhneGallery at 11:51 AM No comments:

Email ThisBlogThis!Share to TwitterShare to FacebookShare to Pinterest
Labels: baptizing in the name of the Father and of the Son and of the Holy Spirit, CP Thomas, India, Kingdom Gospel Ministries, Lord's glory, make disciples, Matthew 28:19, Syamson Roberts Kolagani
Older Posts Home
Subscribe to: Posts (Atom)